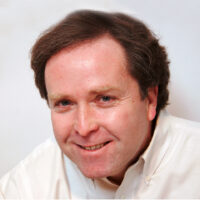 Kevin McDermott is a principal with the Futures Strategy Group. In addition to his scenario-planning work for corporate and government clients Kevin is also the founder of Collective Intelligence, a boutique strategic-communications firm in New York.

In addition to his contributions to Horizon and to the US Coast Guard’s Evergreen project Kevin has been among the project leaders on FSG engagements in the fields of education, health care and urban economic development.

Kevin publishes extensively, including most recently Paragraph 3: Prepared Leadership in the Age of Perpetual Uncertainty. One reviewer describes Paragraph 3 as “the guidebook we need in the post-Covid world, where unpredictability and uncertainty are part of our everyday reality.” Among Kevin’s other publications have been his contributions of new perspectives on the strategic foresight and planning disciplines, notably through his widely distributed blog pieces for Future Strategy Group.

Kevin began his career as a journalist, pursuing entrepreneurial reporting projects for leading U.S. publications including The Atlantic Monthly in Haiti, The New York Times in Britain, and The Washington Post in France. He made a specialty of international business and finance reporting for such publications as Business Week and The Economist.